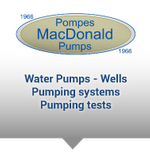 MacDonald Pumps Is Now a Division of the AquaWaterEau Corporation Conglomerate

Through a strategic focus on growth over several decades, MacDonald Pumps is now a division of the AquaWaterEau Corporation conglomerate.

MacDonald Pumps is certainly one of the oldest names in the water industry in Canada. Few companies can boast of having provided the equipment for thousands of pumping facilities in Canada since 1966. This expertise is a guarantee of satisfaction for all our customers.

This integration provides clients the benefits of the largest water pump, analysis and treatment centre in Canada. As well as $3 million in inventory in the largest showroom in Canada.

This natural integration of a pumping systems service with water analysis and water treatment divisions provides customers with support across all their projects.