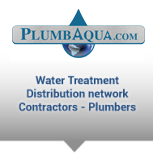 PlumbAqua is Now a Division of the AquaWaterEau Corporation Conglomerate

Established in 1966, PlumbAqua quickly became a leader with one of the largest distribution networks for water analysis and water treatment equipment in Canada.

Through a strategic focus on growth over several decades of development and acquisitions, PlumbAqua is now a fully integrated division/banner in the AquaWaterEau Corporation conglomerate, which is recognized as the largest centre for water analysis and water treatment equipment distribution in Canada.

The name PlumbAqua was retained following the acquisition of the assets of the MacDonald et Fils company in March, 2010. PlumbAqua is certainly one of the oldest names in the water industry in Canada.

The PlumbAqua division is a banner reserved for a network of plumbing contractor dealers. Distributors of this banner also offer water testing services by AquaLabo laboratories.

PlumbAqua is one of the largest banners used by plumbing contractor dealers who offer their respective clienteles sales and installation of water treatment equipment.

To date all distributors have sold hundreds of thousands of water treatment equipment installations, components or parts. There is no doubt that PlumbAqua is the # 1 choice for plumbing contractors.

A division/banner of the AquaWaterEau Corporation conglomerate, The Company has received the prestigious National Bank of Canada’s SME Award three times. The highly reputed Dun & Bradstreet rating agency granted a 3A1 rating, received by less than 1% of Canadian and global companies.

The Company has been directed by Mr. André St-Denis since 1988, and for the PlumbAqua Division/Banner since 2010. In addition, the integration of PlumbAqua into the AquaWaterEau Corporation conglomerate provides direct, preferred access to an experienced team composed of real experts in the water treatment industry in Canada.

To our knowledge, no other distribution company offers its network of distributors water testing services by its own laboratory accredited by the Ministry of the Environment of Quebec, according to the PALA,
based on the ISO 17025 Standard, 2005 version (AquaLabo), plus a team of water treatment specialists, chemists, microbiologists, biologists, environmental specialists, engineers, engineering PhDs as well as several business partners, such as engineers, hydrogeologists, educators, etc.